For approximately 420 million years, sharks have lived on Earth, surviving five mass extinction events, however it is now obvious that many species of sharks are imperiled. The largest threat identified to sharks and rays is overfishing (Wild Aid, 2019). Sharks are extremely vulnerable to fishing pressure due to their life history characteristics; they grow relatively slowly, take years to reach maturity and produce very few young, which means they are not able to reproduce quick enough to replace those being caught, consequently the number of sharks is decreasing. If shark populations are to recover, there needs to be a reduction in fishing pressure, however this is not easy as small-scale shark fisheries support the livelihoods of a large number of coastal communities. Many fishermen do not choose to intentionally kill sharks for a living, it is a matter of living near the ocean and the need to catch anything that brings in the money to feed the family. If an alternative income to fishing would be provided, then there would be a much greater incentive to stop fishing sharks. Furthermore, it has been demonstrated that conservation policies are more likely to succeed if local communities are able to share the economic benefits of environmental protection. Ecotourism is thought to be one of the most effective ways of achieving this goal because it enables the long-term sustainability of protecting a species or area (Hill et al., 2016).

Over the last 70 years, sharks have experienced significant declines, with several species now listed as Endangered or Critically Endangered. Despite conservation efforts, many populations are still at risk because of the demand for shark products such as fins, meat, bycatch and loss of habitat.

Artisanal shark fisheries have provided employment and an important source of food on both coasts of Mexico for many years, with activities dating back to pre-Hispanic times (Applegate et al., 1993). However, with the steady increase in human population during the 1960’s, sharks quickly became an alternative source of animal protein. This led to the promotion of shark fishing by the Mexican government in the 1970’s, and consequently an increase in shark fishing (Castillo-Geniz et al., 1998). Over the years, Mexico has become one of the leading nations in shark exploitation and is among the top five countries in the world that exploit sharks and rays (FAO FishStat, 2019). Although commercial fishing is present in Mexico, it is the artisanal fishery that represents approximately 80% of the total elasmobranch landings in Mexico (Castillo-Geniz, 1992). Today there are approximately 130,000 artisanal fishing vessels operating in Mexico (Bizarro et al., 2007). Many of these fleets operate in coastal waters in the Gulf of Mexico, ranging from the US-Mexico border to Quintana Roo, in the southern Caribbean Sea. These vessels are part of a multi-specific fishery operating based on the seasonal abundance of certain species.

Intensive monitoring of the Mexican Gulf of Mexico and Caribbean Sea showed that shark landings consisted of 34 species, including the scalloped hammerhead (Sphyrna lewini), and the smalltail shark (Carcharhinus porosus), which are both listed by the IUCN as globally ‘Critically Endangered’ with populations decreasing (IUCN, 2019). Other targeted species include the blacktip shark (Carcharhinus limbatus) and bull shark (Carcharhinus leucas), which are both listed as ‘Vulnerable’ and decreasing (IUCN, 2019). Today, the list of endangered shark species is long, with more than one third of all shark and ray species facing threat of extinction (IUCN,2021). New research, who analyzed nearly 1,200 species of Chondrichthyes (sharks and rays) describes that of those species studied, 37% were considered “Vulnerable”, “Endangered” or “Critically Endangered”.

Saving Our Sharks was formed in June 2010 by a group of concerned friends, divers and scientist that who felt an urgent need to act in order to protect and conserve the environment around their home in Riviera Maya, Mexico. They were especially concerned for the local shark population.

Their first and continuing initiative was a research project focused on tracking the migration of Bull Sharks in the Mexican Caribbean. The goal was to study the population movement and to determine its genetic background and health. For more than 10 years, SOS has tracked sharks and other species to better understand their migration patterns and overall numbers in order to protect and conserve the critical habitats they inhabit and use for mating and birthing.

As threats to the environment, the sea, and to area sharks continue to grow, the Saving Our Sharks mission has, likewise, continued to expand to meet challenges with accomplishments only dreamt of at its start. This includes programs ranging from expanded shark tagging with buoy and satellite tracking to the publication of the first Manual of Good Practices for Diving and Interactions with Bull Sharks.

The latter’s goal is to teach safe encounters through education and scheduling to protect the bull sharks that return every winter to Playa Del Carmen.

Saving Our Sharks has been instrumental in promoting significant environmental legislation, overseeing the designation of conservation zones and protected areas for sharks and sea life throughout the Gulf of Mexico and Caribbean side of Mexico to the Pacific side of Mexico, and piloting an Environmental Education Program that has reached more than 120,000 people since 2014 via talks in schools and in public venues.

Now, Saving Our Sharks is taking on its most ambitious plan:

The Isla Mujeres Shark Initiative. With the implementation of this initiative, Saving Our Sharks is poised on the cusp of another major accomplishment in the protection and conservation of sharks for the benefit of Mexico and the world. 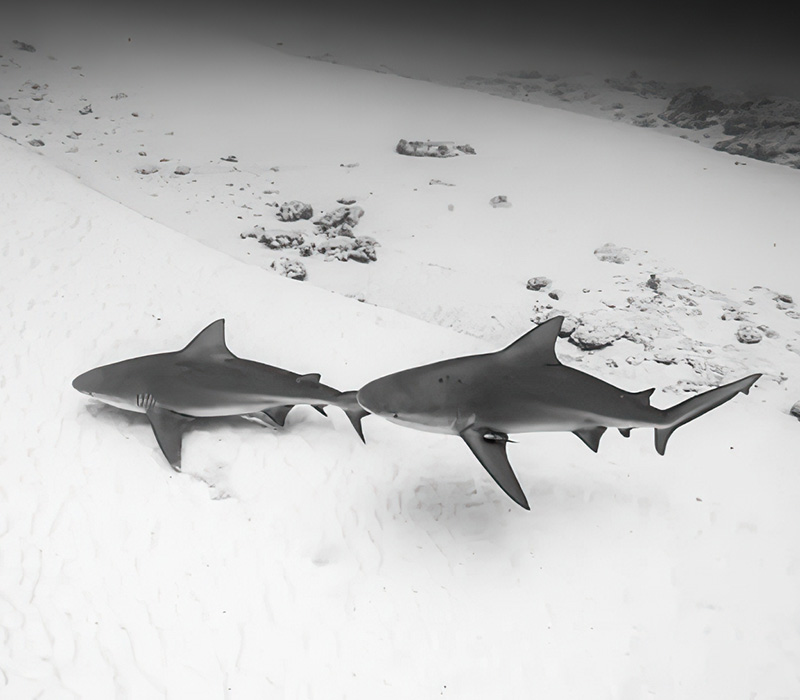